Learn about T.B.C.D.’s Exclusive Wastewater Recycling Systems.  (No Illegal Hauling or Dumping of Unfiltered Wastewater) Do Not let the EPA prevent you from building up your new business.

Learn what other vendors do not want you to know. 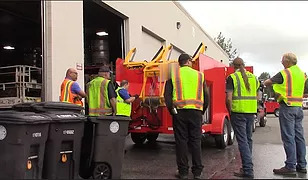 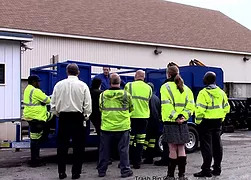 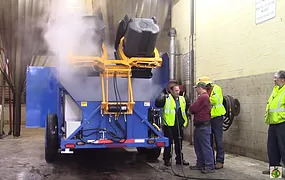 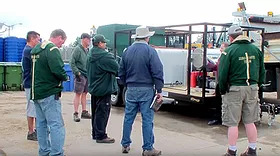 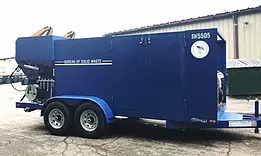 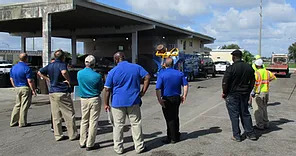 Millions of carts are replaced each year because of labor shortages, and no effective way of cleaning & sanitizing the carts until now. TBCD offers the fastest and the most environmentally friendly trash cart cleaning systems (with full wastewater recycling).

Everyone wants to live and visit places that are smelling fresh, clean and healthy.

Filthy smelly garbage cans are a public nuisance and eyesore. A smelly city with poor sanitation and trash all over the place does not attract people or tourists, let alone investments.

Learn Why You Need a Wastewater Filtration and or Recycling systems?

TBCD has responded by adding additional filtration & recycling system stages that will separate oils, grease, phosphates & chlorides from the wastewater while filtering solids down to 5 microns.

Most HOA’s and many cities mandate that homeowners store filthy bacteria-infested trash cans inside garages so they are not seen from the street. Making these communities the perfect breeding ground for pathogens.

Contact us to receive our bid specs. pricing and brochures. 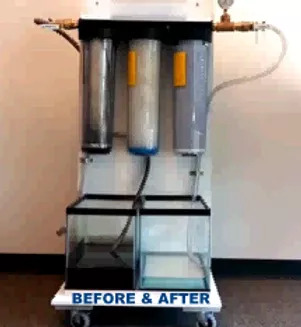 You will be able to clean the filthiest trash carts in an average of 30 seconds. This will allow the city workers to clean up to 40 extremely filthy trash carts per hour! This will save the city on labor, water, fuel and hopefully help with employee retention.

The wastewater generated will be filtered down to 5 microns, and our multiple stage filtration & recycling systems filters Hydrocarbons, Oil, Fuel, Phosphate, Chlorides & Odor Control Filters allowing the city to recycle the wastewater one additional time doubling the number of carts cleaned in a day.

Most cities are then able to drain their wastewater into a sanitary sewer.

Saves money by cleaning carts that have household paint and are heavily built up with debris inside. Instead of the city shipping carts off to a plastic recycling plant, clean them with the system You will be amazed at how many carts can be salvaged and put back in service.

True Heat High-Efficiency diesel-fired 600,000 Btu heaters, can save you up to $1,600.00 per month on diesel fuel, compared to other pressure washers on the market. Buying from Trash Bin Cleaners Direct ensures that you are investing in a street-legal vehicle.

Watch this amazing demonstration of our Hydro-Clear Recycling Systems. These are only the last three stages of a 17-Stage filtration.*

As people become more concerned with health and the environment, having a trash can cleaning services in your town will place you right in the middle of the largest change in the sanitation industry in years.

According to the Centers for Disease Control and Prevention, approximately 48 million Americans get sick, 128,000 are hospitalized and 3,000 die each year from food poisoning.

​Bacteria, viruses, and parasites are the sources of many food poisoning cases, usually due to improper food handling. The trouble begins when certain bacteria and other harmful pathogens multiply and spread, which can happen when food is mishandled.

CDC identified eight known pathogens (bacteria, viruses, and parasites) that account for the majority of foodborne illness, hospitalization, and deaths​

Salmonella is the name of a group of bacteria that causes the infection salmonellosis. It is one of the most common bacterial causes of diarrhea and the most common cause of foodborne-related hospitalizations and deaths.

​Clostridium perfringens, also known as C. perfringens, is very common in our environment. It can multiply very quickly under ideal conditions.

Campylobacter is a common cause of diarrhea.

Sources: The bacteria can be found in unpasteurized dairy products and salty foods such as ham and other sliced meats. Foods that are made or come in contact with hands and require no additional cooking are at highest risk, including:

Escherichia coli, better known as E. coli, are a large group of bacteria. Although most strains of E. coli are harmless, some can make you very sick. One strain, E. Coli O157:H7 (STEC) is commonly associated with food poisoning outbreaks because its effects can be extremely severe.

Norovirus is one of the leading causes of food poisoning and often results in symptoms similar to stomach flu such as stomach cramping, nausea, vomiting and diarrhea. Norovirus spreads easily by coming in contact with someone who is infected, especially in crowded areas. Foods, drinks and surfaces also can become contaminated with the norovirus.

​Toxoplasma gondii is a parasite that causes toxoplasmosis — a disease that can result in serious health problems in individuals who are at high risk for food poisoning: pregnant women, infants, older adults and people with weakened immune systems.

We offer free hands-on training, 150 page marketing and training guidebook, route managing software that can be linked to an accounting system and can store and process credit cards, and send out emails and bulk test messages. Website design is included with purchase.

Contact us for more details. We also offer multiple marketing packages that would include logo design, truck or trailer wraps, door hanger flyers, business cards and uniforms, and more

Our recycling systems will also vacuum wastewater from up to 100 ft away from the vehicle, allowing you to recover the wastewater from dumpster pads and storefronts, opening the door to pressure cleaning contracts with retailers like Walmart & Target, to name a few.

TBCD offers the most environmentally friendly systems in the industry. 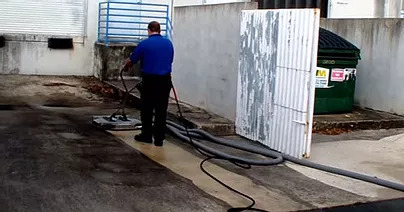 If any equipment manufacturer tries to tell you that wastewater produced by a trash bin cleaning is greywater and If they suggest that you dump your unfiltered wastewater in local car washes or RV park drains. I would ask yourself what else they are lying to you about.

Clean, restore & reuse those filthy trash carts that you thought were to time-consuming to clean. Our cleaning systems can clean 20 times faster than pressure washing alone. 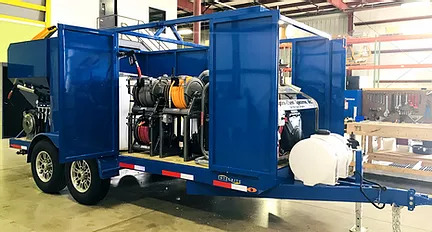